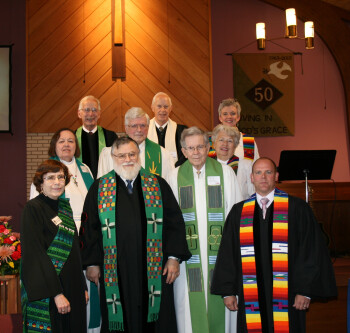 Seven courageous and committed Christians attending Faith Methodist Church, Lisle, met in the summer of 1962 at the Woodridge Village Hall for worship. Their pastor, Rev. Cal Ryan, encouraged their goals and the Adult Church School class teacher, John Sipley, volunteered to give pastoral leadership temporarily. By year's end, 35 people were worshiping at Goodrich School each Sunday.

The idea began in 1962 at the Faith Methodist Church in Lisle. The first year, the congregation grew from seven to twenty-one members. The meeting place moved from the Woodridge Village Hall to Goodrich School. Woodridge United Methodist Church was officially born with a Service of Organization on Sunday, October 20, 1963.

A Pastor and Location

In June, 1963, having taken early retirement, John L. Sipley accepted appointment as interim pastor and was ordained a year later. He devoted the next eight years ministering to the church. A house at 2629 75th Street was rented as the parsonage in August. By September, the Board of Missions of the Rock River Conference purchased a 4-5/8 acres of land at the corner of 75th Street and Catalpa as a permanent building site. The Service of Organization was held Sunday, October 20, 1963 at 3:00 pm at the First Methodist Church of Downers Grove when 71 people became members of the Woodridge Methodist Church.

A Church and Parsonage

The present parsonage was built in the Spring of 1966. In June, ground breaking ceremonies were held on the 75th Street site for the first unit of the church. On December 11, 1966, the first worship service was held in the church (now Bonfal Hall). Since the state required kindergarten in public schools, the church built a classroom addition for the school district in 1968.

When Rev. Sipley retired in 1971, the Rev. Dr. J. Michael Miller was appointed to serve this church. The congregation continued to grow, so plans were made for the sanctuary addition. The church celebrated Christmas Eve 1977 in the new sanctuary.

Rev. Miller accepted an appointment to Oral Roberts university in June, 1978 and Rev. Bob Keller was appointed pastor of this church. With a growing membership and the expanded program, Rev. Bonnie Purser joined the staff in 1982 at the church's first associate pastor. Lincoln United Methodist Church in Chicago became a special outreach ministry of the church. In 1984, Rev. Keller took a year's leave and Rev. Rolla Swanson was appointed to this church.

Rev. E. Dale Kleinschmidt was appointed our pastor in 1988. The fall of 1989, the church began its Christian preschool, Small Miracles offering 2 classes. We celebrated our 25th Anniversary as a church that year, too, and purchased a new organ.

In 1994, Rev. Linda Foster Momsen was appointed to serve our church. Seminarian Dave Buerstetta joined the staff as assistant pastor in September of 1995. Pastor Dave was named Minister of Education and Youth in 1997.

A major renovation project was started in 2009. Many necessary repairs were accomplished and the offices were remodeled to better meet our needs. Rev. James & Deacon Beth Galbreath joined the church in 2010. Pastor Jim shepherded us through many of these changes. When Pastor Jim retired in 2014, Rev. Danita Anderson, past District Superintendent, became lead pastor.

As we continue our journey, we are humbled and assured by God's abiding presence and love. Our walk with Jesus, and with one another, continues as the lifeblood and spirit of this congregation of United Methodists.